Look at that! I have a new book out! Double Dragon Books had originally scheduled Evil Outfitters, Ltd for release at the end of the year. Then it got moved up to July. Then a slot opened up in the publishing schedule, and it's out now!

It's set in the same world as Jack of All Trades, if you liked that one. It'll probably take a few days to appear on Amazon, but you can order the book from the publisher at the link above. There's also an excerpt of the first chapter on that page.
Posted by K.C. Shaw at 6:20 PM 8 comments:

Labels: Evil Outfitters, me-me-me it's all about me

I don't have anything much to say except I'm sick of looking at that photo of my catfish dinner from the other week. I've discovered that the picture is only interesting if I'm hungry. Otherwise it's disgusting. So I'm going to scroll it down a little by posting.

I brought my writing files up to date this evening. I have a plastic box with hanging file folders inside where I keep copies of contracts and so forth. It's useful to have it all in one place in case I need to check something. And as it happens, I discovered I have my rights back to a few older pieces. Now I need to find time to dig up reprint markets.

Tomorrow I have to go in to work at 8am and I probably won't get home until after 10pm. This is really, really unusual, fortunately, and with luck it's the last day like this I'll have to endure. I'm actually filling in tomorrow evening for someone who's on family leave. It's a secondary contract to my main job, so I get a separate little paycheck and everything. It won't be much money, but every little bit helps. But oh, do I dread tomorrow night.

Oh, and I've signed up for Camp NaNoWriMo for June! It's like regular NaNo but you pick a month in the summer to do it! I wasn't going to bother, but I want to work on my new YA project (working title: Shadow Trail) and this will be a good way to get a lot of words down quickly. I have an outline already, so it should go pretty smoothly. (Famous last words, of course. I just jinxed myself.)
Posted by K.C. Shaw at 7:39 PM 3 comments:

I want to finish all the things

My success so far this year finishing up both Bloodhound and The Cabin on Wildwood Hill has made me eager to finish more projects. I certainly have enough active files in my WIP folder. I've been working on Adventures in Zoology, which is more than half done already, but my recent work editing and finally proofing The Weredeer (for release in early summer!) has made me interested in one of its unfinished sequels, Stag in Ruin.

I have started a new, untitled YA and I think it's going to be pretty good. I'm not hurrying with it, though. This time of year I rarely plunge into a new project. It's more time to peck around and finish up old ones. And that's fine with me.
Posted by K.C. Shaw at 8:51 AM 5 comments:

I had some pictures on my camera that I just processed. They have nothing to do with anything. The first is my supper last night, which was catfish. Very good catfish! I picked it up at our little local store because I suspected it was probably locally caught, and I think I was right. It was certainly very fresh fish. I couldn't eat it all, but I sure tried. 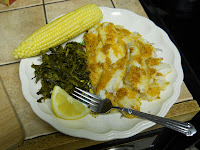 My recipe for pan-fried catfish: Mix about 1/2 cup cornmeal with 1 tsp cayenne pepper and 1 tsp paprika, some fresh-ground pepper, and a little bit of salt in a big, fairly shallow bowl or pan. Pour maybe 1/4 c olive oil into a frying pan and heat. Mince two cloves of garlic and put into the oil. Rinse catfish fillets, shake off most of the water, and press into the cornmeal mixture until each fillet is covered on both sides. Place fillets into frying pan on top of garlic. Cook six or seven minutes on each side until flaky and cooked through, and salt a little bit whenever you flip the fillets. Squirt lots of fresh lemon over the fillets just before eating. Yum.

The next picture is Jekyll sitting on the pergola, taunting me. I did finally figure out he can get down by himself. He drives me crazy sometimes. 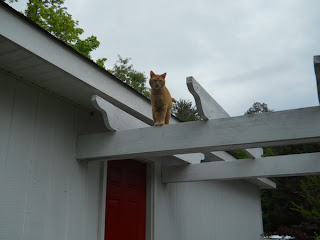 And finally, I found these little copper thingies on etsy and bought them--they were only a few bucks in all, including shipping. I don't know what to do with them but I love looking at them. They are so little and perfect. 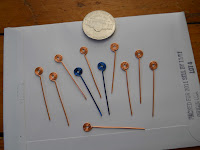 I have reached grandmaster status in boring

The spring semester is over at last. Finals week has been punishing as usual. Back when I was in college, I never dreamed that one day I'd be on the other side of the tests (for those of you playing along at home, I am a test proctor/invigilator in my day job) and that it would be worse than taking the tests myself.

I've worked here four years now, so I know not to ask too much of myself during finals week. I can be productive next week, not now. Fortunately, the only thing I have due at the moment are the proofs for The Weredeer (yes, we're close!). Unfortunately, I have enmeshed myself in an online game.

It's called Ultima Online. I quit playing maybe five years ago and honestly thought the game had closed down. Through really byzantine means--by which I mean that I didn't actually seek it out--I found out a few days ago that the game is still going. So I opened up my old account for the heck of it, and lo and behold all my characters are still there and so are their skills and all their stuff.

This game was a pure time sink for me for years. I can see that it won't be that way for me soon; I figure after a few weeks max, I'll be getting bored with it again, and I'm already finding myself shutting down after a while and doing something else. But I have also spent many hours over the last two days just wasting time in the game. You know what's a time-waster and boring? Fishing in an online game. And yet I spent two-plus hours last night doing just that.

That's fine for finals week. But not next week, when I don't have an excuse to waste time.
Posted by K.C. Shaw at 3:42 PM 2 comments: