This weekend I went to Chattacon, in Chattanooga, Tennessee. Chattanooga's only two hours from my house, which is the perfect distance: not so far that I'm over-tired when I get there, but far enough that I feel like I've actually gone somewhere. And I really like Chattanooga. So I went to Chattacon although I knew I wouldn't know a single soul there (I didn't) and I wasn't sure I would get much from the panels (I kind of did). I did enjoy myself a lot, though. Here are some pix and some excerpts from my travel journal. Warning: it's long.

Despite freezing rain, I made it to Chattacon and checked in at the Chattanooga Choo-Choo Hotel. The room is quite nice, with a little balcony that overlooks the pool. Outdoor pool. Freezing rain. Not a good combination. I put my bottled water on the balcony to chill.

The program...hmm. Well, this is a very small convention. I didn't expect it to have a huge program of panels. Fortunately I really like downtown Chattanooga, and if I can't find anything to do at the con there's lots to do in town--ice and rain or not. 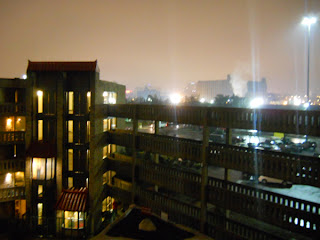 left, view from my hotel balcony

I bought a con T-shirt ($25, but I like the design) and took a walk before it got dark. I just walked down Market Street for around 20-30 minutes, crossed the street, and came back. That took me through a chunk of downtown, with lots of banks and nice restaurants with candlelit tables, and a TVA building that looks just like the one in Knoxville, and a big Krystal's office building, and more banks, and parking garages, and bike rentals. I passed a clothing boutique with actual gas lamps flickering on either side of its front door.

So far I've been surprised and pleased by the friendly feel of the con. Maybe it's because it's so small, I dunno, but everyone is very welcoming. I've had more conversations already than I had the entire weekend at Worldcon last year. One of the conversations was with an elevator repairman who happened to be on the elevator with me and thus was able to repair it when it didn't move. He seemed like a nice man, and was fortunately competent, although his outlook on life--at least as far as elevators are concerned--was a bit negative.

Not to self: find out where the stairs are.

Wow, it's getting cold out! I walked over to the opening ceremonies and about froze in my light wool jacket. I brought my heavier coat but it's in the car.

Bath taken. Shower also achieved so I could wash my hair. A few dozen pages edited. Many tweets tweeted. I'm in bed now, about to turn out the light.

They've fallen silent now--probably driven inside by the cold--but there are a few noisy groups on the balconies or maybe spilling outside from overflowing parties. From time to time they start singing or chanting and, once, howling. It's fun to listen to. If I was a more outgoing person--and boy am I not outgoing--I'd stop by one of the advertized parties just so I could howl too. 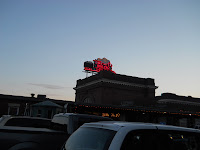 The howling went on until past 2am. I kept waking up, but it always made me smile. There's some hungover folks waking up about now.
This coffee shop, Chattz, is like a Starbucks but with slightly less bad-for-you food. I have a hot chocolate and a cranberry scone. Both are good. It's still very cold out but the sun is trying to come out. It's supposed to warm up to over 50 today.

I saw a hand-lettered sign on the elevator advertizing a steampunk panel at 11am. It was either a last-minute addition or was accidentally left out of the program. I'll head back soon so I can go to that one since there's nothing much else I want to see at eleven. Then at noon there's another steampunk panel I'll attend. From the con garb I've seen, there's a big steampunk presence at this con. Not surprising, really, since we're surrounded by old trains. 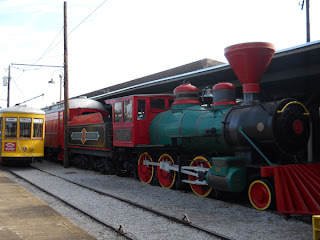 10:04
I have close to half an hour to kill before I head back. I'm almost out of hot chocolate and I'm getting bored. I am the most easily bored person I know. But if I leave now, I'll get back way too early and then I'll still be bored, just in my hotel room instead of here. I suppose I can scope out a place to have lunch. There's a cafe at the hotel that does pizza. Maybe I'll have pizza for lunch. It'll probably be awful. Hotel pizza.

Oh hell, I can't leave here until someone else does. I don't know if this is a place where you bus your own tables or leave your dishes for the servers to clean up. I don't want to leave my mess and have them think I'm a dick but I don't see anywhere to put my dishes. But apparently everyone else here is killing time too. No one has left since I got here.

Maybe we are all waiting for someone else to leave. 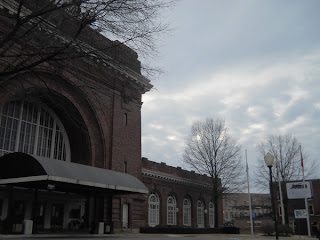 left, the front of the hotel

The steampunk panel I'm at is actually the making of an indie steampunk movie called "Engines of Destiny."

noon
That was an interesting panel and the movie looks really good. I need to remember to look for their kickstarter next month. The director reminded me so much of my brother, enthusiastic without being overstated, and super articulate. He even looked a little like Richard.

Now I'm at the next steampunk panel, although the previous panel was just finishing up when I got here so now I know a little bit about brewing mead.

1pm
That was a good panel too, relaxed and fun, although kind of unfocused. I'm tempted to make this a steampunk morning and go to the costuming panel down the hall, but I'm not really into that so I'm going to stay in this room for the History of SF panel. Although I suppose I could go get lunch instead.

[After some debate, the sunshine and warming weather drew me outdoors and I walked to the riverfront at this point.]

Finally found a place to eat, Big River Grille. It's actually the restaurant I wanted to try when I was in Chattanooga last January--not for Chattacon, just a daytrip--but I ended up next door because I went through the wrong entrance. It's a weird building.

I ordered a beer, because I felt like it. Southern Flyer Lager. It's excellent and has an airplane on the label. But I did not get carded and now I feel old. 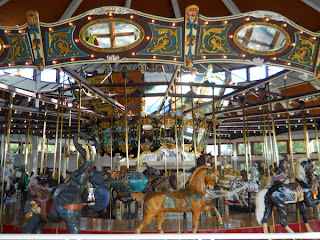 I missed the 4pm panel I kind of wanted to attend. I decided it would be a better use of my time to see the carousel in operation and up close. It was awesome, too. I'm totally putting a carousel in my next book [which is going to be steampunk, incidentally: thus my interest in the morning panels]. I didn't ride it because I didn't want to be sad and/or creepy. There are a lot of things I don't mind doing alone, but a middle-aged woman without kids riding a carousel by herself? No. I have limits.

The name of this panel is "Welcome to My Fantasy," whatever that's supposed to mean. The panelists have gathered and I just heard Tim Powers say plaintively, "Does anyone know what this panel is about?" No one knew. He wandered around asking if anyone had an official description of the panel, and a woman behind me told him that Chattacon isn't very focused on panels. It's mostly about the parties. Powers got very interested in where the parties are being held.

That last panel was low-key but interesting. After that I wandered around in the dusk and took pictures, mostly of the gaslights reflecting on the trains' sides. I saw a steampunk couple getting pix too; the guy was dressed as a conductor, so he stepped up into the doorway of a train car so the girl could take his picture. It really was amazingly cool. I should have asked to take a picture too but didn't think of it until later.

I bought some chocolates and a Coke, since I haven't had enough calories today yeah right. Then I came back to the room and took a bath to warm up, did some editing, and now I'm zonked. Even the howlers aren't out tonight [yet], so I'm not the only one who's tired. Or maybe they're all at parties in the other buildings, or running wild among the streets of Chattanooga under the full moon. 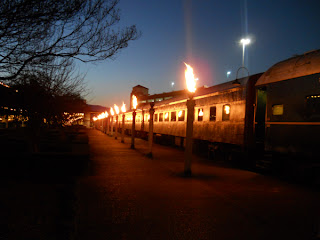 left, FIRE AND TRAINS this is the coolest picture I've ever taken

I woke up at 4am and couldn't get back to sleep. Finally I just gave up and got out of bed. Around 5am the howlers started up, singing drunkenly for a remarkably long time--past 6am.

I wanted a bagel or something light, but the hotel's coffee shop has nasty-looking pastries. I got a tiny hot chocolate that cost $3, although I must admit it's excellent.

The con ends early today and there are no panels and very little programming. If I check out and hit the road soon, I'll be home before lunchtime.
Posted by K.C. Shaw at 6:40 PM 2 comments: 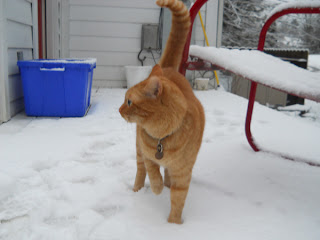 The weather started getting bad this afternoon around three, with the endless rain (it's rained for a week!) mixing with slush and then turning to driving snow. Ordinarily I'd have worked until 4:30pm today, but thank goodness the college where I work decided to close at 3:30. It took me an hour to get home. Well, okay, ordinarily it takes me around 50 minutes and today I stopped on the way home to get a pizza, but still! An hour!

When I stopped for the pizza, I had a hard time stopping myself from doing donuts in the slush-filled, near-empty grocery store parking lot nearby.

I got home at last and put my car up in the garage, then grabbed my camera before the light went. Here's my little house in the cold and snow: 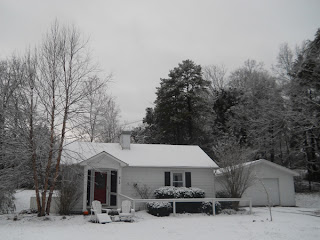 There's not much snow on the ground, and the falling snow turned to rain and then stopped completely, but I think it's supposed to start again in another hour or so. We might get another inch! What's less thrilling, of course, is that it's going to freeze tonight and everything is sopping wet from all that rain.

Here's the road just in front of my house. 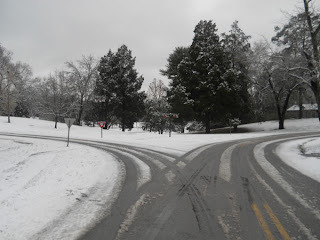 And here's the commons, an open area just past the picture above. It's flooded from the rain. That will freeze tonight. Brrrr. 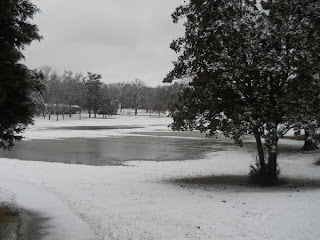 Labels: I own a house, weather

I didn't actually mean to stop posting after my 1,000th post. I've just been busy.

Right before the new year, I saw a tweet from someone who suggested keeping a jar throughout the year where you put slips of paper with notes about good things that happen to you. Then at the end of the year you take the papers out and read them, to remind yourself of small kindnesses and pieces of luck that came your way. I love this idea. It's so easy to forget the good stuff and only remember the bad.

I need to buy a jar, but I already have a few slips ready to put in it. And we're only ten days into the new year.
Posted by K.C. Shaw at 8:13 PM 8 comments: