Have suitcase, will travel

I bought a new suitcase recently. It's a sophisticated shade of purple. My old suitcase was flimsy and kind of beat up; this one's much nicer and it's got four wheels instead of two, so I guess if I ever miss my ride I can just sit on my suitcase and scoot to my destination.

Then I rediscovered Etsy, which I'd bought stuff from before but never really browsed. On Etsy I discovered and bought (among other things) a leather passport cover with a design of trees stamped on it, a customized leather luggage tag (with my name and email on it!), and a lingerie bag made of gorgeous blue and purple cloth.

I am so ready to go somewhere.

I get this urge to travel every few years. This year at least I have two trips planned, one in April (my brother's family has rented a beach house for the week and has invited me and Mom to join them) and DragonCon in September. But I want to go somewhere now, somewhere exciting and wonderful. Maybe that's why I've suddenly set aside Bloodhound to work on Adventures in Zoology.

Incidentally, to pay for my Etsy stuff I've started my own Etsy shop. I sell handspun yarn! And stuff I've made from handspun yarn! I've already sold a few things (enough to pay for an inexpensive silver ring I just ordered) and I'm happy to be clearing out some old yarn and working on new yarn. Maybe I can make enough money to take a trip somewhere, like a voyage on the Orient Express.
Posted by K.C. Shaw at 6:19 PM 6 comments:

My fantasy novella, The Dragon Whisperer, is out this week from Double Dragon Press! It's a fun, light, slightly romantic story--in fact, here's the cover blurb:

May Armstrong used to be a renowned animal tamer, until her mind-control abilities disappeared along with her ghostly mentor. She’s been retired for two years—but a pushy king won’t let her refuse his job offer. He wants her to tame a dragon for him. She knows she can’t do it.

But when May’s current employer turns out to be more than just an innocent ship’s captain, suddenly she’s a wanted woman in more ways than one. May has a big decision to make: risk being eaten by a dragon, or outrun bounty hunters and city guards for the rest of her life.

It's available in just about any ebook format you can think of, and if you order now you get a 15% discount. You can read the first chapter on the page I linked to above. I love this book. I hope you do too!
Posted by K.C. Shaw at 11:20 PM 13 comments:

Labels: Dragon Whisperer, me-me-me it's all about me 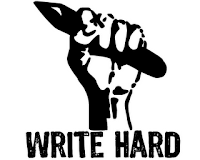 The amazing Cate Gardner has nominated me for the Write Hard award! She's so awesome, and to prove it I point to the recently published collection of her short fiction, Strange Men in Pinstripe Suits.

Rules for the award:

1. Post the picture above to your blog. You can link here if you want. It doesn't have to become part of the permanent clutter of your sidebar. Goodness no.

2. List at least three writers who you feel live up to the "write hard" spirit. Think: writers who work at their craft, writers who never give up despite the odds, writers who constantly turn out quality work. Writers you admire. Optional: explain why you think they are awesome.

3. Include these rules or a link to them.

4. Notify said writers of their victory. Ask them to pass on the torch.

Here are my picks of 'write hard' writers--and I could have picked just about anyone off my blogroll, because you are all awesome writers. I'd nominate Aaron Polson, but he started the meme. :)

Jeremy Kelly. Jeremy's list of published short fiction is amazing and inspiring, and he works hard to craft the best possible stories. Editors agree that obviously he's doing a good job at it!

Carrie Harris. Because she writes books while wearing werewolf heels and taking care of her kids. I can't wait to read her first novel, Bad Taste in Boys, which comes out this summer!

Danielle Ferries. Hopefully she hasn't been washed away in the Australian floods. Danielle writes marvelous short fiction and edits the hell out of her novels at the same time. I'm not sure how she manages it.
Posted by K.C. Shaw at 2:49 PM 7 comments:

Money is no object, apparently

Holy crap, it's Monday again and I haven't posted all week. I can't even use the excuse that I'm busy, because I'm not.

I did talk my mom into coming to Atlanta with me this Labor Day weekend. We're both going to DragonCon! My mom and I get along really well, obviously; plus she's a big SF fan. I think she'll have a lot of fun, plus we're going to split the hotel room, which will save me a bunch of money. Except that if I were going by myself, I'd be staying at the same cheap hotel in Marietta that I stayed last time. Now that Mom's going with me, we decided to book into a downtown Atlanta hotel--the Westin Peachtree, which has just been added as one of the convention hotels!

I've never stayed in a really fancy hotel before. I need a nicer suitcase.
Posted by K.C. Shaw at 10:25 PM 7 comments:

Well, Cate Gardner changed her blog and it looks so nice that my own blog seemed really boring in comparison. So...new template! Besides, it makes me think of spring and I'm sick of snow and cold.

I subbed the romance book (titled Shadows over Oakhill)--not to Harlequin, since it just didn't fit with any of their lines, but to Samhain. Hopefully they'll like it. Whether they do or not, I think I can say that the ignoble experiment was a failure. I like the book (well, it's really a novella), but I didn't meet my goal of selling it to Harlequin. But I expect I'll sell it somewhere, and it'll be interesting to see how it does compared to my fantasy books.

I'm home from work today due to the snow--oh, look, it's snowing again--and I've actually done quite a bit of writing. I'm finally using my time wisely! In between tweeting and updating my blog design, of course.
Posted by K.C. Shaw at 1:46 PM 8 comments:

Suddenly...I understand the vampire-hate. I'm reading The Sweet Scent of Blood by Suzanne McLeod. I'm 125 pages in and I loathe it. The main character is a wimp, and every single other character is either a super-powerful sexy vampire man or a woman who hates the main character for no reason. I keep reading it and hating it, although now that I've explained how much I despise this kind of main character (why is she even the main character? she's a wimp and frankly kind of stupid) maybe I can convince myself to put it down and read something good.

But in the 125 pages I've read so far, I've come to understand all the vampire hate out there. Lord knows I've whined that a lot of markets post in their guidelines that they're not interested in vampires, and I've never understood why when there's so much a good writer can still do with them. Well, this book is why. Or maybe not this book specifically, but it's just a carbon-copy of all those other sexy-superpowerful-vampire books.

I'm sick of them. And YES, thank goodness, I just felt my brain drop its hold on this book. Now I can put it down and never ever pick up another book where the vampires are obviously loathsome but the reader's supposed to find them attractive.

Back to writing Bloodhound, where Cam is going to kill as many vampires as I can manage without it seeming silly.
Posted by K.C. Shaw at 7:45 PM 8 comments:

Labels: no love for the vampires, other people's books

Wow. I just sold a short story! This is the story I actually wrote (or finished writing, anyway) on December 31. I just got the acceptance to Pill Hill Press's Leather, Denim & Silver anthology.

Labels: me-me-me it's all about me

Despite my carefully laid plans, as usual I'm kicking over the traces and messing all my plans up. Right now? I'm suddenly obsessed with writing Bloodhound, the sequel to Bell-Men. Yeah, you know, that book I haven't sold. But I've intended to make it a trilogy all along, and I suddenly know what I want to do with the second book, so boom. I started writing this evening.

It also snowed two inches today. AGAIN. Yeah, I know, I'm supposed to live in the sunny south. I can't believe how much snow we've had this winter already. Fortunately, by the time I left work (and I had to give a placement test this evening, so I didn't get to leave until late), half the snow had already melted and the roads were clear.

I'm happy to be writing, even if it's not the project I should be working on. I'm quite certain Bell-Men will sell--I reread it over my vacation, when I was in the throes of my cold and couldn't really concentrate on anything I hadn't already read, and it's actually very good. When it does sell, it'll be nice to have the sequel ready to go too. Besides, I've missed writing gory scenes of Cam cutting off vampires' heads.
Posted by K.C. Shaw at 10:07 PM 6 comments:

I'm working on my untitled romance. Since I'm hoping to sell it to Harlequin for their Intrigue line, it has to be between 55,000 and 60,000 words, and my first draft fell about 5,000 words short of the minimum. I'm now adding a small subplot and fleshing out some early scenes that were a little too rushed anyway. Hey, these two people are falling in love! I need to give them lots of time to gaze longingly at each other.

I'm close enough to being finished that I really need to come up with a title. I've been browsing through the official Harlequin website to see what the titles typically are, and I'm concerned that my book doesn't fit what seems to be a theme of 'sexy cowboy lawman protects woman in danger.' My characters are a woman who's been hired to take care of a farm and the farm owner who thinks he's turning into a vampire (but who's actually being poisoned). Something tells me I might be just a leetle out of focus.

I should have paid more attention to their guidelines when I was plotting this thing: it says right there, "Kidnappings, stalkings, women in jeopardy...are examples of story lines we love most." Well, my heroine does end up in peril toward the end, and the hero does save her, but she's not in peril from the git-go and I suspect that's going to mean this book does not sell to Harlequin. And I think we can safely say that with all the trouble I've had with this rotten book, I'm not a romance writer.

But what can I do? I've already written the wretched thing. Anyway, I'm thinking about titling it Shadows over Oakhill Farm. What do you think?
Posted by K.C. Shaw at 10:04 PM 12 comments: