Another Halloween is over, and another NaNoWriMo is about to begin. Hopefully I'll get some sleep in between.

I made a complicated costume that actually turned out really well, considering that in the end it was mostly held together with safety pins. I don't have a long mirror so I couldn't get a decent picture, but here are two pix I did get in the bathroom mirror. The shiny is the batwing cape I made from some gorgeous lacy cloth. 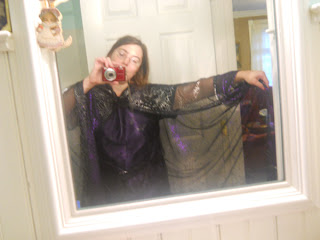 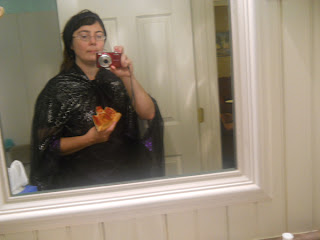 Oh, and I got pizza on the way home from work.

Jekyll wore a costume too. It came with a little hat but the costume was made for dogs and the hat wouldn't fit. He didn't mind the collar, at least. Jekyll is shy, but as the evening progressed he got to the point that he didn't freak out so much when kids came to the door. Sometimes he'd even stay in the living room, and all the kids commented on him. 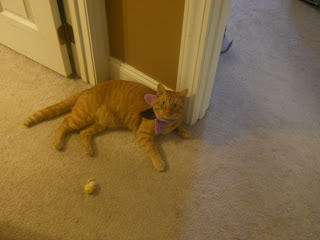 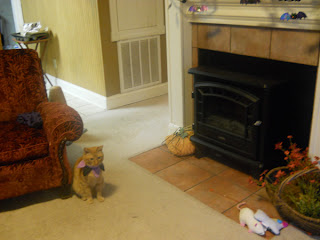 One little girl asked what I was supposed to be dressed as. I said, "An evil queen who didn't have time to fix her hair."

Incidentally, I made a lot of effort to find unusual candy. The lollipops with plastic skeleton arms as sticks were a huge hit, as were the gummy mummies. My personal favorite was the plastic vampire teeth that came with a little pouch of candy blood. How cool is that? I made sure to give them to older kids, not toddlers. 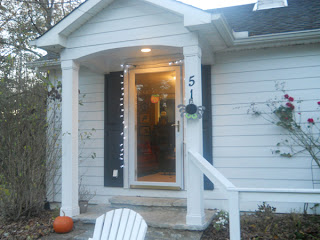 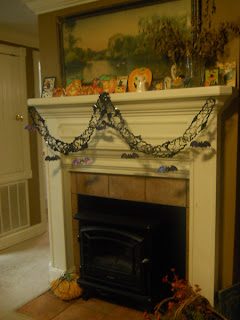 The house looked particularly good, if I do say so myself.

The cold weather kept a lot of kids away, unfortunately, and I have a bunch of candy left over. I plan to take it to work tomorrow. The last thing I need during NaNo is candy to graze on while I type. 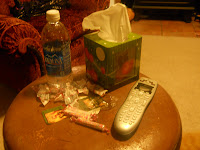 I woke from a sound sleep at two this morning with the sound of a metallic crash still reverberating in my ears. Naturally I assumed the cat had knocked something over, and since I was scared I reacted by yelling several obscenities really loudly, because ghosts are scared of yelling.

Then I got up and turned on all the lights.

Jekyll was in the hallway outside my bedroom, his tail fluffed up and his eyes big and round.

These are my thoughts, as near as I can remember them:
It's a ghost.
No, a neighbor cat must have jumped onto the outside of a window and scared Jekyll.
But what made the noise?
Is someone trying to get into the house?
I'd better look outside.

Then I turned around and saw that part of a plastic "FOR SALE BY OWNER" sign had fallen out of the capped chimney and onto the electric heater that sits in the fireplace, along with a lot of soot and cinders.

I don't know what a FOR SALE BY OWNER sign was doing in my chimney. I didn't put it there. The chimney was capped something like ten years ago when the house was remodeled, long before I moved in, and presumably the cut-down sign was used to block off something up there. There's no flue in the chimney anymore and, of course, the chimneytop itself has a metal cover over it, although there are ports in the cover's sides, presumably for ventilation.

The wind gusted outside, making the house creak gently. Then I heard scrabbling in the chimney.

I pictured a sooty and furious, probably rabid, raccoon leaping down from the chimney and attacking my face. So I banged on the heater and yelled more obscenities, and the sounds stopped. I waited a long time and didn't hear anything but the wind, and there wasn't a draft from the chimney so hopefully the FOR SALE BY OWNER sign wasn't blocking off something important. I cleaned up the soot and cinders, threw the sign away, and turned off all but one living room lamp.

Then I went back to bed and stared at the ceiling, listening tensely, for the next four hours.

Further details if any come up.

Edit: I left the house a while ago to run down to the post office, and three young raccoons and what I initially thought was a white cat ran from my side yard across the street. About the time I realized the "cat" was an albino raccoon, they were gone and I wasn't able to get a picture. But, you know, mystery solved. They were probably fighting crime.
Posted by K.C. Shaw at 12:36 PM 1 comment:

The lovely and talented Cate Gardner has tagged me! I felt like just copying her answers because they're so clever, but probably someone would have noticed. So here are my answers.

What is the title of your book?
Wharf Rat

Where did the idea come from for the book?
The main character started out as a small-time thief in another book I wrote a few years ago. He wasn't even supposed to have a name--he was only supposed to steal something from one character so that another one could look good by catching him--but he turned out to be such an appealing guy that I wrote him into the story. Ever since, I wanted to feature him in his own book.

What genre does your book fall under?
Fantasy.

Which actors would you choose to play your characters in a movie rendition?
Oh, gosh. I don't know actors. Since the main character, Rone, is an elf, I'll say Orlando Bloom except that Bloom would need to go on a three-day drunk before shooting started and also have his front top teeth knocked out.

What is a one-sentence synopsis of the book?
When Rone, an incompetent thief, takes a job delivering messages for a businessman, he stumbles on a conspiracy involving a foreign prince and a princess who isn't supposed to exist.

Will your book be self-published or represented by an agency?
Let's hope I get an agent when I'm done.

How long did it take you to write the first draft of the manuscript?
It's not done, but I've been working on it on and off for a few months. I'm planning to finish during NaNo.

What other books would you compare this story to in your genre?
It's a kind of heist story set in a fantasy world (which itself is based loosely on New Orleans and Savannah), but any titles I list would make me sound too full of myself so I won't list any.

Who or what inspired you to write this book?
Hey, wait, that's sort of the same question as one earlier. That's cheating.

What else about your book might pique the reader’s interest?
Rone can't read or write. I'm writing a book about a guy who can't read. Weird. Also, he's not interested in learning. Also, I think I just totally swallowed a bug. (Wait, that has nothing to do with my book.)

And now I have to tag five people. Don't worry, I won't be upset (read: I won't notice) if you don't respond:
Laura Lam (who just did a very similar or possibly identical post a few weeks ago, so technically she already responded)
Becky Regalado
Michael McClung
Rob Haines
Wesley Chu
Posted by K.C. Shaw at 4:59 PM 5 comments:

Every so often I get an email from someone asking me how they can find a copy of Jack of All Trades, my first book. It's been out of print for almost a year now and used copies are getting expensive. Well, very soon now it'll be in print again; Double Dragon is going to reissue an updated edition with new cover art. It will also include the short story "The Neverstone," which is set after the events in the book.

To celebrate that, I thought I'd do a giveaway--not just of an original, new paperback copy of Jack of All Trades, but a new paperback of Evil Outfitters, Ltd. too, which is set in the same world. I've listed the giveaway on Goodreads and you'll have to sign up (it's free) to enter. Good luck!

I'll post the release date for Jack of All Trades when I know it for sure, but it'll be soon. My editor emailed me yesterday to let me know it might be as soon as next week!

Edited to add: I just got the new cover art, which is awesome beyond all understanding, and a note from my editor to say that the new edition should be live on the Double Dragon website within a day or two!
Posted by K.C. Shaw at 9:03 AM 4 comments:

Questions to Ask Yourself at the Shoe Shop

1. Why do they put weird, useless buckles on otherwise attractive shoes?
2. Why is it so hard to find shoes these days with small heels? They're either flats or stilettos.
3. Cute shoe. Can I afford it?
4. Does it fit?
5. Is it comfortable?
6. Is it going to be comfortable after I've worn it for eight hours?
7. Is it appropriate for work?
8. Is it the right color for my work clothes?
9. Is it the right style to go with my work clothes?

I forgot to ask myself #9, which is why I have a pair of otherwise perfect shoes and now I have to buy a whole new wardrobe.

Sure, these shoes are both black and brown so I can wear them with anything except navy (and who wears navy these days anyway?), and sure they look great with dinosaur socks and jeans, but my work clothes are definitely on the frumpy side and these shoes aren't.

Maybe I should de-frump my closet. 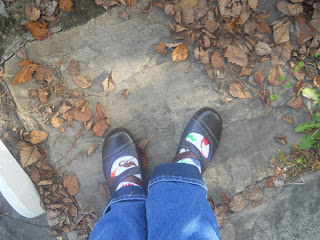 This post has nothing to do with writing, so I'll bring up... [cue ominous music] NaNoWriMo! I'm in again this year, probably to finish my current WIP, Wharf Rat. Anyone else doing it? 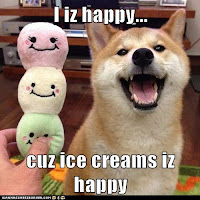 Last night I set that pic to my desktop. I will be happy all month, I told myself! It's my birthday month, and Halloween is coming, and the weather is cool and breezy and drizzly just the way I like it. NaNoWriMo is next month. Harper Voyager has a two-week open call starting today and I have two projects to submit (there's no limit to how many you send them).

Then this morning my alarm clock went off and I couldn't find it. Seriously, what the hell? I have five things on my nightstand overnight: a box of tissues, a tube of lavender hand lotion that I don't use but which looks pretty, the alarm clock, my glasses, and my cell phone as a backup alarm since my alarm clock is old and sometimes doesn't go off. Sometimes it just stops keeping time, too. I fumbled around in the dark, cursing and knocking my glasses to the floor, before I smacked the alarm and got up. Then I remembered the happy ice creams.

It hasn't been a bad day, actually. I've tried really hard to keep a good attitude even when, for instance, I had to wait ten minutes for a security guy to show up at work to open the closet where I keep my stuff (and which I do not have a key to). I made beef stew and chocolate chip scones tonight and did not burn either hardly at all. I sent my two submissions to Harper Voyager--and yes, I didn't get an autoreply email for either the way I was supposed to, so I had to send an email to make sure they got them and I haven't heard back yet. And the book I was reading had a stupid ending and both ebooks I had as backup books turned out to be terrible. But I HAVE A GOOD ATTITUDE DAMMIT BECAUSE THE ICE CREAMS ARE HAPPY.

I will sit here and breathe deeply through my nose now until I can be civil.
Posted by K.C. Shaw at 7:54 PM 2 comments: