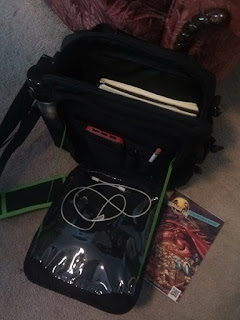 Not shown: the velcro-backed badges I've ordered for the bag's front panel (intended for badges). I ordered three from etsy and haven't received them yet, but hopefully I'll get them before DragonCon and everyone will know I am Team Valor, have B+ blood type, and really like Totoro.
Posted by K.C. Shaw at 8:50 PM No comments: