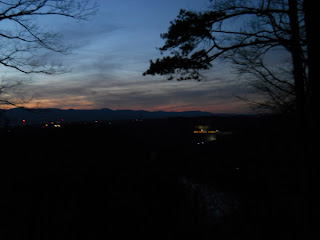 I got back to the car at 7:30, and I can't have gone much more than two miles an hour overall, so I guess I probably only hiked about two miles--maybe less, since I spent some time trying to get a decent picture. Still, it was a good workout and a perfect way to cool down from a frustrating day.
Posted by K.C. Shaw at 8:11 PM No comments:

So when I got home and realized she was making herself sick rather than deal with the move to a new home, I called her former owner and asked if she could take her back. And thank heavens, she did. I feel guilty about this, but on the other hand the woman has another cat (actually, she has ten) that is more outgoing and needs a good home. So she took the little gray cat back tonight--and the cat is thrilled to get back to her person--and Wednesday night she's bringing the other cat over.

So now I feel guilty and sad, because she was a sweet little cat. But I am not really emotionally prepared to deal with a neurotic animal right now. We'll see how the other cat does. Probably a good thing I didn't get a dog, huh?
Posted by K.C. Shaw at 6:15 PM 5 comments: 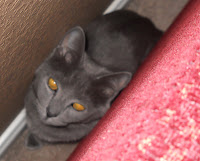 She's been hiding since I got her at 9am this morning, but she's letting me pet her as long as I lean over the couch and stretch my arm down to touch her without her actually moving. I got a picture of her with the flash. She didn't even jump.

She's about two years old and very shy. I think we'll get along just fine once she decides to come out from behind the furniture. The house is full of cat toys.
Posted by K.C. Shaw at 6:41 PM 6 comments:

You know how if you've been reading one author's books for an extended period of time (in my case, ten days) and no other books, and then you finish the last one, it's hard to imagine reading anything else by any other author? That's me right now. I finished the last Mike Carey book and can't settle to anything else.

In totally unrelated news, I'm getting a cat instead of a dog. I'd actually told my coworker that I couldn't possibly take care of a dog right now, so whatever synchronicity was gearing up in that area got cut off. Then a friend of my mother's asked if I could take in her dad's cat after he died, and I said I would. She's going to bring the cat over this weekend.

I think it's a movement

I picked a terrible time to stop reviewing books over at Skunk Cat, because last week I discovered a great new author. I recommend Mike Carey's Felix Castor novels, starting with The Devil You Know. I'm on the fourth book (five available as far as I know, and I have the fifth waiting for me when I finish this one). They walk the line between fantasy and horror, with a main character who's an exorcist (and an atheist) who dispels ghosts using music.

So I've been reading steadily all week. I'm way ahead of my goal of reading 100 books this year. And I just realized, with a certain amount of embarrassment, that out of the 22 books read so far, seven have featured ghosts. But I can't get enough of books with ghosts, a trend I noticed a year ago. And I still sometimes watch Ghost Hunters.

Ghosts? They're the new vampires. Maybe I'll throw one into my next book.
Posted by K.C. Shaw at 8:50 PM 6 comments:

Here is a list of names from a book I'm reading. Look at them, and then I have a question for you.

Now, how old are these people?

That's right, those are names of people I grew up with. In other words, if they're not forty yet, they're nearing that age. And yet these are characters in a YA book published in 2008.

I'm not surprised that I picked up the book from the remainders table at Books a Million. I'm just surprised it got published at all. It's not even very good--the main character is repulsive and the plot is slow and dull. And the author is clearly out of touch with something as basic as what this generation of young adults are named. It's no wonder that she has the main character wanting to read a Rolling Stone magazine (have high school kids ever read Rolling Stone? At least since the 70s?). And I'm only 68 pages into the book.

Character names are important. If you're sloppy about naming your characters any old thing, you're probably being sloppy about other details. And you will end up REMAINDERED. Be warned!
Posted by K.C. Shaw at 9:12 PM 6 comments:

I've got an idea for a sequel to Misfits, and I can't wait to get started on it. But...I'm not sure if I should start writing it yet. What if Misfits doesn't sell? What if I get an agent for it and she/he wants me to take the next book in a different direction?

Anyway, I've got other books waiting for my attention. I don't like leaving projects half-finished when they're still "live" in my imagination. I've been planning to finish Adventures in Zoology for over a year; maybe I'll work on it next. And The Trickster Society really needs me to finish the rewrite.

Besides, until I can think up a working title for the Misfits sequel, I'm better off not starting it.
Posted by K.C. Shaw at 9:17 PM 4 comments:

My attempts to learn Irish Gaelic are paying off, in that I have finished the eight Pimsleur lessons and feel pretty competent asking someone in Irish if they would like to drink wine or beer at my house. (Heaven help me if they want something besides wine or beer.) I've got a different set of CDs on the way, in a different dialect (not my choice; you take what you can find) so that ultimately my speech will veer from dialect to dialect and any native speaker will decide I'm insane.

I found a used book called Learning Irish, quite a score although I'm struggling with the dense jargon and intensive grammar lessons it contains. I think it's for people who are already linguists, or who are really serious about learning the language. Like, maybe they have to move to really rural Ireland where they will conceivably need to say things like "He hadn't got his glasses on so he shook hands with his sister instead of the bishop" and "I was dreaming again last night about death." (I did not make those up. They're straight from the book.)

From Learning Irish I discovered that my bafflement with what I'm hearing versus what I read has a reason: "Irish can be regarded as having two complete (or nearly complete) sets of consonant sounds" (p. 2). In other words, depending on context, the consonant sounds in Irish shift from one sound to another--similar to the English words 'knife' and 'knives' (/f/ to /v/), but all the time. That is COOL.

To help with my pronunciations, I've been scouring the internet for audio files. There's not a whole lot out there, but what I've found is rather endearingly amateur. One file I listened to this evening was a guy reading out greetings in a monotone, and then halfway through he pauses to cough, giggles sheepishly, and then finishes the list. It's not very helpful, but it made me smile.
Posted by K.C. Shaw at 8:26 PM 2 comments:

Maybe a better selection would help

I went to Books a Million yesterday, looking for a specific book, The Giant Thief by Tallerman (I find the author's name combined with that title amusing). Even though I hate the city, I drove into Oak Ridge because their BAM has a better selection than the Knoxville store. Also I wanted to visit Big Ed's Pizza but that totally had nothing to do with my decision, I swear.

The Giant Thief was released on January 30. BAM did not have a copy. So when I got home (smelling faintly of green peppers and happiness), I bought the ebook instead and was able to start reading it immediately.

And there in a nutshell is why brick and mortar bookstores aren't doing very well.
Posted by K.C. Shaw at 9:19 PM 2 comments: