I have a weird work schedule anyway, but this week it was even weirder than usual--but that's good, because it meant that I got off work on Friday at 10:30am and then had the whole weekend free! Friday was chilly and rainy, so I went and saw a movie (John Carter of Mars, or whatever it's called; it was fun).

Saturday dawned beautifully sunny and warm, so I opened a gallon of exterior semi-gloss white paint and decided it was time to paint the front railing. So I did. It was honestly a perfect spring morning: birds singing, sun beaming, a light breeze fluttering my hair, people walking by with their dogs calling greetings to me. By the time I'd finished painting the railing, it had dried, so I went back and did a second coat. 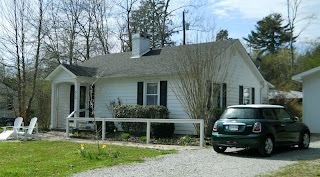 So then I went around and painted part of the back porch, but didn't do all of it because I decided it was time to paint the pergola.

I didn't know what a pergola was until we bought this house. It's a open trellis that doesn't have a roof, and of course the house has one. It's old and needs repair and/or replacement of many of the beams, and it badly needed painting. So I got out the stepladder and got to work.

I started painting the railing at about 9:15 am. By the time I ran out of paint while working on the pergola, it was a quarter until two. I took a shower, changed clothes, and went back out and washed and waxed my car. Because apparently I get my energy from the sun like flowers do. And I mowed the front lawn (badly).

I finished painting the pergola today and finished the first coat on the back porch, which looks very nice but will have to wait for its second coat at least a week because it's going to rain rain rain all week long. I also repainted the white adirondack chairs in the front of the house. And I have a sunburn, a strained muscle in my arm, a full-body crick in my neck, and so much paint left on my skin I look like I have leprosy. But by god the house looks great! 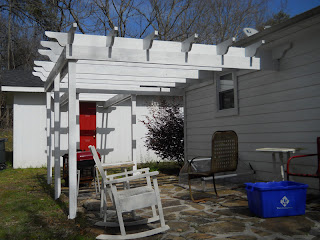 The pergola. Disregard the clutter underneath it, which I need to rearrange (and some of it goes on the back porch but is not on it currently while the paint dries).

The back of the pergola, by the garage: 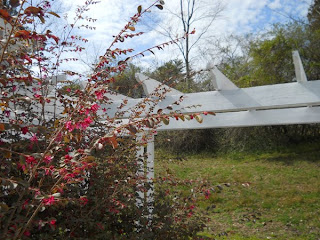 The back porch. Once the second coat is on and dry, the red chairs go back on the porch: 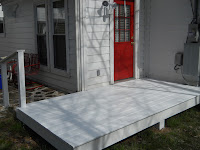 And finally, Jekyll the cat who wishes I would play with him instead of painting constantly:

Labels: house beasts, I get up and move sometimes

Yikes! I don't think I've done that much work in one day since, um, ever.

Looks beautiful. And I like that the flowers are already blooming in the front yard.

Oh yeah, the daffodils are gorgeous! There are tons more about to bloom, and some of the tulips are getting buds on them too. Spring is here really early this year.

Today I learned what a pergola is.
Looking good.

Your house is adorable.