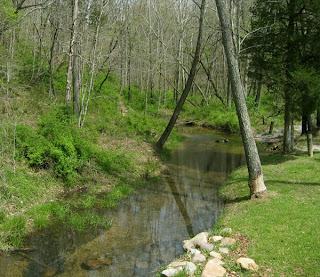 I borrowed my mom's camera and got a few shots of Clear Creek when I went out hiking this afternoon after work. I won't post too many, but I wanted to share what I get to experience ANY DAY I LIKE, because I am SO LUCKY to live here.

Above is Clear Creek itself, taken from the little bridge next to the parking lot. A lot of people just come here to let their kids play in the creek and have a picnic lunch nearby.

I stopped here because I saw the hugest king snake I've ever seen in my whole life, but sadly I couldn't get a picture of it before it slithered away. I would swear it was four feet long, but let's assume I was overestimating due to its being moving and me being shocked at the size of a snake the length of oh, I don't know, a VW Beetle, and we'll say it was maybe three feet long. Anyway, I took a picture of the slope I'd just struggled up, but I don't think you can really tell how steep it was. It was darn steep, believe me. And I wasn't even at the top of the ridge at that point. I only had to rest once on the way up, although I do admit I was puffing like a steam engine.

And here's six people on horses. I am very jealous of these people, whoever they are. This picture was taken at the top of the ridge, on a track used by rangers, which is why it looks more like a wagon track than a trail.

After that, I started down the White Pine trail, which I typically refer to as the Squashed Frog trail since the first time I hiked it, I almost stepped in a very large, very dead frog. That sort of thing stays with you. White Pine trail comes down off the ridge on its other side, then loops around and meets Clear Creek again, whereupon it turns into Lower Clear Creek Trail. It gets greener and greener as it goes along, with wild oats and periwinkle blooming by the sides of the trail. 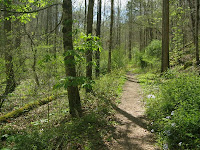 I think the road to Rivendell looks sort of like this.
Posted by K.C. Shaw at 6:12 PM

Wow. That's absolutely beautiful. Now I am even more jealous. I'd have to drive a half hour at the very least to find some place to hike.

If you have not yet read it, you should take a look at Annie Dillard's Pilgrim at Tinker Creek. One of the best books written, says I.

Mr. Caine is jealous? I have to drive for hours for something like that. I love the land around here, I really do, but it isn't the best for woodsy hiking. Most of our trees are gnarly redbuds, stumpy cottonwoods, and brownish "evergreens".

MW--Oh, Pilgrim at Tinker's Creek is one of my mom's favorite books! I know I've read it, but I think it's been at least a decade. I'll borrow Mom's copy and reread it. Thanks for the suggestion! :)

Aaron--I don't know, cottonwoods sound exotic to me because we don't have them here (I think). Of course, you can come visit too! Bring a cottonwood sapling for my garden. :)

I have to admit though, I'm more of a 'is there a cafe and a coffee shop around the corner' girl.

Great photos, Kat -- and it's nice to see this area you've written about so often. Makes me want to start walking more, now that it's finally warming up around here...

Very nice pics. Looks like the timber preserve across the road from my house, only taller and with bigger snakes. We do have lots of horse riders around here though.

Cate--The cafes and coffee shops are actually a half hour drive from where I live (mostly). I like them too. :)

Kevin--Oh, you ought to! Spring is perfect for getting out and roaming around lookin' at stuff.

Jamie--I bet you've got snakes just as big, you've just never seen them. (Although this snake I saw must have been, oh, fifteen feet long.)