The garden in July 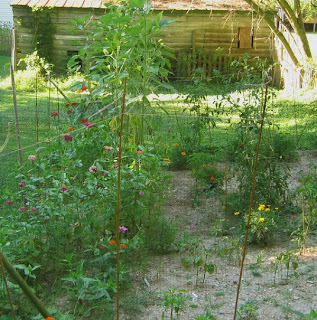 It's July 1, and that means a picture of my garden! Whee!

Actually, the garden's not doing as well as I'd like. Many of the peppers seem to have contracted some kind of fungus or something that has killed some of them and has slowed pepper production to almost nothing in others. Some of the plants seem either resistant or just lucky: the NuMex Twilight and Purira peppers are producing like crazy, many of the Fish peppers are getting big and looking handsome and healthy, and at least one Habanero has escaped the blight. Next year...not so many peppers.

I've planted two yellow squash plants in hopes of getting some squash before the inevitable powdery mildew claims the vines. I need to get out there tomorrow and yank up the lettuce that has gone to seed, which will free up some space for, I don't know, maybe a few more tomato plants. Some of the tomato plants aren't doing so well, but several are taller than I am now and loaded with green tomatoes (and one ripe one as of this afternoon!).

The sunflowers are about seven feet tall, as you can see from the picture--it's about all you can see from the picture--with zinnias blooming like crazy in front of them. Mom put up a makeshift fence of deer netting over bamboo poles to discourage the local deer, who were trimming back the tomato plants (but not the lettuce or the flowers; go figure).

So anyway, that's the garden. By August 1 it'll look like a jungle, or possibly a desert.
Posted by K.C. Shaw at 7:43 PM

I love the building in the background. It looks like it could be converted into a very cool writing space.

Ying would crap himself over all the room you have! His mother wanted to turn our whole front yard into a garden. I said no ; )

July is a bit of a transition for our garden, too. The mammoth sunflowers are almost taller than me now.

Danielle--It's actually an old two-car garage plus a shed space where we keep the gardening stuff. It's full of carpenter bees.

Natalie--If I could manage it, I'd turn the entire front yard into a garden here. It gets lots more sun and the soil isn't mostly clay up front. :)

Aaron--We've got one mammoth sunflower in the front yard that was a volunteer. It bloomed a few days ago and looks so cheerful!

Sorry about the blight, but at least you have some strong plants to get through it. It looks much better than the weedpatch I call a garden. I am really good at growing thistles.

I've always thought thistles were pretty. You can tell people you're growing them on purpose!

All looks very green and healthy to me, but then I currently have straw for grass.

If it doesn't rain soon, I'm going to have straw for grass too.

I always have such great plans for the garden on February nights. I put some stuff next to the deck, but you know, it gets hot. And there are bees. And weird little wingy things that adhere to your hands. Not to mention a total lack of rain here which would require turning the hose on that has a really cool spider web spun all around it.

Yours looks pretty good from my perspective...

I have super plans for gardening in February too, and they all sort of turn out like the July picture--dry, half-dead, and full of weeds.