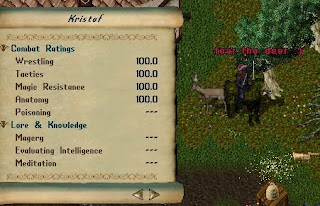 I just found my old photobucket login and logged in to see what kind of photos I was saving in 2006.

Well, I was saving screenshots from a MMORPG I played obsessively for many years, Ultima Online. Here's a picture of my tamer, Saint Vincent (named after one of my cats), showing off his maxed-out pet deer. Those of you who never played a tamer in UO will have no idea what that means, but the typical pet in that game was a dragon or something, not a deer and training low-level animals to 100% stats was not easy. You'll note also that the deer's name was Kristof. Yes, I had just finished writing the first draft of The Weredeer and tamed and trained a deer in the game to commemorate it.

I'm pretty sure UO no longer exists--I stopped playing years ago and haven't felt brave enough to check. If it's still around, I'll be sucked in and will spend all my free time playing. If it's not still around, I'll be sad because I played that game for literally years. I even participated in the beta back when I was 27 years old. I remember joking with my cousin who also played that no one would believe it if I told them how old I was, because 27-year-olds don't play video games--I mean, 27-year-olds are grown-ups.

Anyway, this 41-year-old kind of misses the game. But at least I've still got The Weredeer.
Posted by K.C. Shaw at 6:27 PM

I remember that game fondly. I *don't* play video games but I played UO so obscessively for a while there that I dreamed in the UO landscape a couple of times, complete with fluffy sheep. Gave it up shortly after N was born...no time.

That was my problem too, no time to play and yet somehow I was playing all the time. I miss it, though.

Ah, nostalgia...and how fitting a name for the animal, eh?

Natalie--I used to take the deer out to kill monsters. People would actually stop what they were doing and watch me, because an untrained deer was such a wimp and a trained one was pretty tough, and no one had ever seen a trained one before. Good days, good days.