In which I bore everyone talking about the bird

The bird is ALIVE. Yeah, seriously. He's like Indestructo-Bird. I was going to name him Robin but I think his name should actually be Hysterical, because he is. Even finches bred for hundreds of years as cage birds don't really get tame. This finch is a true wild bird. He does not like having me around him.

It looks like I'm going to have him around for a while. In fact, I hate to say this--since for one thing, it's illegal to keep wild birds as pets, not that I want to--but even if he lives I may not be able to release him. His tail is definitely broken so he can't fly although his wings are okay. It's hard to tell about his legs, but I'm not sure he can actually use both of them. They don't look broken, so I suspect he may have the bird equivalent of paralyzation from the waist down. If he can't fly and he can't perch, he can't survive in the wild.

I went to the pet store today to look at bigger cages. I liked one of them, which was roomy and wider than it is tall, with a mesh floor instead of the solid plastic floor my current cage has. But it was $60. I'm not quite ready to spend that much on a bird that might still die. So I didn't get him a cage, just some freeze-dried, shredded vegetables meant for finches; when I opened the bag, it smelled so good I wanted to stick my face in and graze.

AND I GOT JEKYLL A COLLAR. With a bell. When he goes outside, he has to wear the collar. I wasn't sure how he would react, but I think he must have worn a collar at some point in his pre-stray life. He didn't fuss even while I was adjusting the fit. It's a black collar with glow-in-the-dark moons on it, and he's very handsome wearing it. When he comes back in, I take the collar off. I'd hate to have him catch it on something and strangle himself while I'm at work. 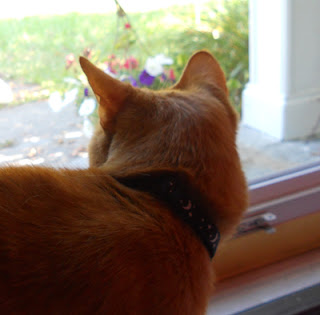 Another thing I did today as a direct result of having a hysterical bird in my room was change my mattress out for the one in the other bedroom. I can't sleep on that other mattress because it's too soft; I prefer to sleep on a rock with a mattress pad on it. So I swapped the mattresses out and I'm going to use the other bedroom as my bedroom. The bird gets my old bedroom. That way Hysterical Robin gets more alone time, Jekyll can sleep on my bed with me again, and hopefully I'll get more sleep.

Oooo… his tail is broken so he can't fly. You should definitely name him Toothless. My kids would love you forever. (Um, of course, they do already, but still...)

lol Toothless the Hysterical Robin! Because he's not a robin. (I find that funny, anyway.)