New birdcage is a pain in the butt

I finally got a bigger birdcage for Toothless the Hysterical Robin the finch, who is still breathing but still can't fly. It's a much bigger birdcage. Jekyll, who is not a small cat, decided to take a look at it while I was putting the perches in. 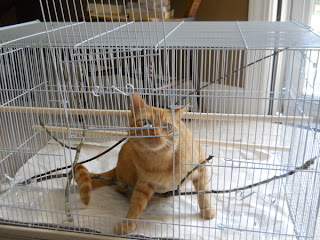 The bottom was mesh and I worried that the bird would catch his little legs in it, so I covered it with paper instead. When I was done, the cage looked awesome. It has two dowel perches it came with, and I added three natural-branch perches (from the yard). I also put in the swing that came with the little original cage, and tied a millet spray from the roof so that it dangles down to the bottom of the cage. While I was working on it, I was all excited at the thought that maybe the bird would be able to hop along the branches and would be interested in eating some of the seed off the millet spray. He might even make it up to the swing!

And then I put the bird in the cage, and he flopped around frantically trying to get purchase on the slick paper. When I took the paper out, he promptly fell on his back and got both wings stuck through the bottom mesh. I put him back in his old cage.

Then I got the wire cutters* and carefully removed the bottom panel of the cage. Because this compromised the cage's integrity, I used zip ties to anchor all the corners together. Then I poured a bunch of the corn cob bedding that goes everywhere into the bottom of the cage, replaced the food and water containers, added the food and water containers from the old cage, and installed the extra water dispenser I bought. I want to make sure the bird doesn't have to travel far to find food or water. The more energy he can conserve, the faster he'll heal.

I put the bird in the new cage. He flapped around for a while, then sat down to sulk. Oh well. He sure looks more comfortable to me. 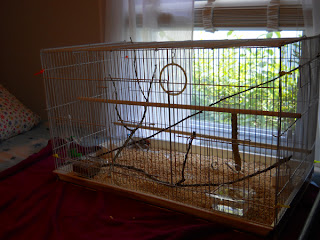 *This translates to "Then I drove out to Walmart and bought some wire cutters."
Posted by K.C. Shaw at 11:18 PM

You've done a grand job there, K.C seeing your cat in the cage reminded me of Tweetpie opening shoot to the cartoon when the cat landed up in the cage with the bird flying around it.

My very best wishes to you.

I didn't even think he'd fit through the entrance, but he just slipped inside. I grabbed the camera so fast I'm surprised I didn't injure myself. :)