That goose is cooked

Our local Food City carries goose. I discovered this while pricing turkeys, but I didn't buy a goose until I noticed that Walmart also carries goose but they are around $60 each. The Food City geese are much more reasonable, around $20. So I bought a goose at Food City and stuck it in the freezer for Christmas baking.

I finally got around to cooking it yesterday. I won't go into too much detail, because not too many people I know would be interested in cooking goose, but I will point out that when people say, "Goose is greasy," they are NOT KIDDING. I opened the plastic wrapping and my hands were immediately covered in grease. It's that greasy, really. Ever handled raw bacon with your bare hands? It's like that, only greasier.

But that's good, actually. Goose grease is healthier and seriously tastier than bacon grease. I have a ton of it (ton here equals about three cups) in the fridge, nicely rendered and ready to use. 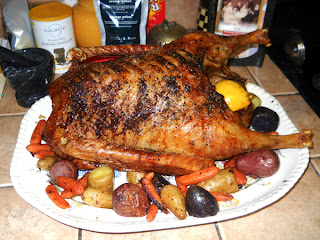 Anyway, the goose itself. Goose is considered a red meat, and I overcooked it despite all my care. It's easy to overcook. It wasn't bad, but kind of chewy due to being overcooked. It tastes like dark meat turkey to me, which I like. But turkeys cost about half as much and are easier to deal with. The vegetables I cooked with the goose were excellent, as was the complicated sauce I made to go with the whole thing. See the mortar and pestle in the pic above, to the left and a bit behind the goose? I've had that mortar and pestle for at least 15 years, but the sauce was the first time a recipe has ever called for a mortar and pestle. I was so pleased that I got to grate cumin seed, caraway seed, celery seed, and a lot of other spices together.

In lighter baking news, I made cookies a few days before Christmas and they turned out great as always. 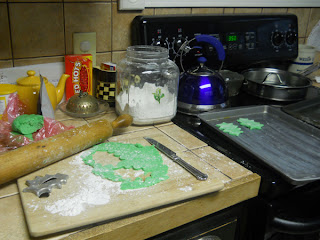 Kind of awkward to roll them out, though, since my rotten horrible hideous counters are tiled. Who the hell chose tile counters for this house? When I'm rich I will have them yanked out and something smooth and durable put in their place. Also something more attractive. As you can see, I had to use the chopping board (the one I use only for vegetables, not meat) to roll out the dough. 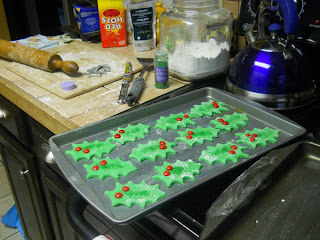 The first batch of cookies ready to go into the oven. I ended up with about 4 dozen cookies total, and could have had a bit more if I hadn't snacked on the dough. 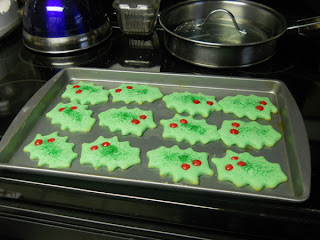 And the cookies just after I took them out of the oven. They are mostly butter. Butter and sugar and green food coloring.

I hope everyone had a great holiday and got lots of good food to eat.
Posted by K.C. Shaw at 6:02 PM

Aquaman loves sugar cookies! So that makes perfect sense. He can't eat them often, though, because they get soggy.

As soon as I read how greasy it was, I was thinking "I hope she saved the drippings." That will make some fantastic stock.

Ooh yeah! I wish I'd made stock from the carcass too, but I was in super-clean-up mode and just pitched it.