I put the tree up last Sunday. I was cleaning that room anyway and thought, "What the hell, it's time." I had considered not putting up a tree at all this year, but I suspect that would have made me even sadder. I did do some crying while I decorated, but was fortunately distracted by Jekyll investigating everything. He didn't try to treat the tree or the decorations as cat toys, just batted at them a few times and sniffed them, so I put the glass ornaments on. So far none of them are broken.

Here's a picture of Jekyll and the tree. I wasn't done decorating it at this point; it's even more loaded with shinies now. 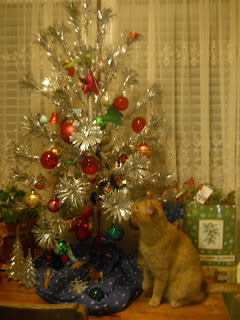 Next year? My next project will be YA, as high concept as I can make it. I've got to start selling books, not just because it's just ridiculous to me that I haven't broken through yet despite all the effort I put into writing and improving, but also because--to be blunt--I'd like to keep my house. I don't make a lot of money in my day job and I never expected I'd need to pay the mortgage alone. So in 2013 I've got to be commercial and practical. Suggestions for high-concept, whizbang, this-has-never-been-done-before-yet-somehow-it's-very-similar-to-things-that-sell-well YA plots welcome.
Posted by K.C. Shaw at 9:35 AM

Zombies vs vampires. I don't want you to be homeless.

I just don't want to move to a crappy apartment. Thanks, though. :)

I love your picture and Jekyll.
I know what you mean about making money from your writing. I hope 2013 will bring us both the rewards we are hoping for.
Good luck with your new project.

Thanks! I hope so too.

You want mainstream? I've read enough crap-fiction: I can do mainstream.

How about an urban fantasy focusing on YAs struggling with nascent super powers. But the powers aren't cool like you'd read about in comics--no super-strength or telepathy. Rather they range from unsettling to painful and disfiguring.

The MC lives in the city and is seeing faint visions of weird, scary, inhuman creatures that seem to be inhabiting the world alongside her. The visions have been fleeting--a glimpse here and there, almost translucent--but are growing stronger. She's in truth starting to slide back and forth between our world and a parallel one, where humans are essentially unknown except as myths.

Other characters are manifesting different powers, and are dealing with a diverse set of problems resulting from them. One is in a psych ward, another in a hospital being treated incorrectly for a supposed disease, another is on the run from abusive parents intent on "curing" him.

Tie these characters threads together around the MC. As they slowly learn to control these powers, the MC discovers how to intentionally shift from one world to the other--and to take her new friends with her. Bad guys and fights ensue.

Okay, clichés galore, sure. But I'd read it.

Holy crap, thanks! I think I can use that. Why don't you outline it for me too? :p

Oh, reading your posts backwards made this post extra-bittersweet, knowing what Jekyll has in store.

Congrats on NaNo -- again. I pooted around with the romance novel and didn't make a ton of headway, but do feel like it's something I'm going to finish eventually.

Also: I finished Goldie and it was awesome. If I get my crap together, I might post a review. There are about a hundred things I like about it.

I'm glad you liked Goldie! There are things I'd change about it if I wrote it now, but I still like it pretty well myself.