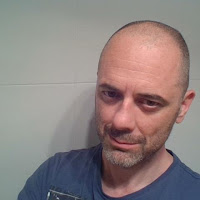 SIMON RUTTER is an Englishman who has largely wasted his life in a series of increasingly pointless middle management jobs in large corporations. This has, however, allowed him to see the world at someone else's expense and he has lived in the United States, the Middle East, Continental Europe and the Antipodes. He tweets and maintains a blog with the grim sense of duty and sclerotic rhythm of a rheumatic gravedigger because, apparently, one has to. He is a vegan, politically active on animal welfare issues and a competitive cyclist. He attacks literature and life with a savage joie de vivre. His strongest literary influences are Waugh, Orwell, Vidal, Lessing, LeGuin and Gibson.

WITHOUT A CITY WALL is his fourth novel but the first to be submitted for publication. You didn’t miss anything with the first three.

KNOTTED THICKET: What are some of your favorite books? Do you reread old favorites
or are you always working on your to-read pile?

SIMON RUTTER: I find the fiction that most resonates with me is strongly character driven and, usually, with some element of transformation or redemption for the protagonist. The novels I that regularly re-read tend to be those that had a huge impact on my when I was young. I regularly revisit books by Waugh, Greene and Orwell. In particular I greatly admire the Sword of Honour trilogy, Our Man in Havana and Keep the Aspidistra Flying.

One science fiction book that had a revelatory effect on me when I first read it was Neuromancer by William Gibson. I bought the first edition paperback in the winter of 1985 and read it while waiting for a train in King's Cross station. Today King's Cross is a pristine and glassy temple to consumerism with a Harry Potter gimmick but in 1984 it was a soot smeared, dimly lit cavern of junkies and prostitutes and therefore provided the perfect context in which to read Neuromancer. With the wisdom that inevitably accrues to the aged I now see that Gibson somewhat co-opted Neuromancer's heady blend of brand fetishism and nihilism from Ian Fleming but it is still a brilliant and genuinely groundbreaking book that I love.

KT: How much research do you do when writing science fiction?

SR: I do almost no active research. If I see or read something that will make a compelling theme or plot element I make a note of it for later use. One of the joys of being a science fiction author is that we get to strike the shackles of the mundane. I do take great pains to make sure that the science elements in the books are at least plausible and consistent within the bounds of my amateur knowledge.

KT: You've got a fun list on your blog of SF books you want to read but not write. How do you decide which ideas you want to develop into a book?

SR: For me it always starts with the characters. I usually blend characteristics from people I know and grotesquely exaggerate them for dramatic effect. Lucy in Without a City Wall is based on someone with whom I used to work. I thought she was an interesting individual and began to ponder the character's actions and reactions on a broader dramatic stage.

Also, if executed to a high standard, writing a novel is a vast amount of work; literally thousands of hours. Therefore I have to be rabidly enthusiastic about the themes and ideas in order to take it on. I usually have two or three book concepts in rough outline form and then select one as my next project. A quick glimpse at my notebook reveals that I currently have four ideas in outline form.

KT: What are some of your (non-writing-related) hobbies?

SR: I love linguistics and languages. In the past I've studied Russian and German but at the moment I am studying French and preparing for the Diplôme d'études en langue française B2 exam in November. I'm saving Arabic for my seventies.

I'm also a very keen cyclist and enjoy every aspect of it apart from the inevitable crashes.
Posted by K.C. Shaw at 5:36 PM

Labels: hurrah for my friends, interviews