Hmm, did I really post a raw-rough scene from an unformed project last night? It appears I did. Let me just post above it in case someone wanders along and thinks I post dull, badly written crap all the time.

Well, I do, but at least it's not usually fiction.

I did some more looking into ereaders, for ebooks. (How long until sticking e- in front of a noun sounds, like, so turn of the century?) The consensus is that they're all doin' it wrong.

Pardon me while I insert a lolcat here. This one slays me. 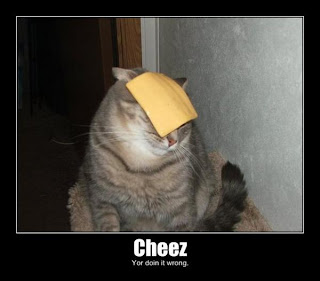 Anyway, there's a thread on Absolute Write that talks about ereaders some (I post there--guess which post is mine! Hint: it's the wordy one.), and a post on Booksquare that goes into even more detail. It sounds like the technology is there, but the people actually developing the products are not.

That reminds me of the Asus eee PC, a darling mini-laptop computer that is almost what people want but not quite. Not to mention that the price keeps goin' up and the specs keep goin' down and the release date keeps gettin' pushed back. The eee would be perfect to use as an ereader--small, lightweight, eminently portable, with wifi and browsing capabilities to find and download books--but it's not available yet and I don't know if I'll get one until the second wave comes out next year anyway (I want a blue one; right now they're only available in black or white).

But my poor old computer needs to be replaced with a real laptop before I start buying eees or ereaders anyway. My computer was once a blazingly fast gaming machine, but it's now over five years old and starting to have problems. And I don't do any gaming anymore (except tower defense and Boggle, of course, and the Kingdom of Loathing).

I've wandered away from my original topic, I find, but let's leave it at that. I still haven't critiqued the stories for my writing group tomorrow, and I still haven't finished the story I wanted to finish for the group, and I haven't eaten yet, and anyway there's a cricket hiding in the living room driving me crazy singing. Times Square this ain't.
Posted by K.C. Shaw at 5:36 PM