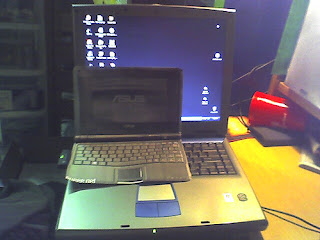 I stole this picture from EeeUser.com, which is fueling my intense desire for the super-portable, ultra-adorable Asus eee laptop, which is supposed to be released in the U.S. within a few weeks (hopefully by November 1, but Asus hasn't confirmed that yet). It's got a Linux OS and No Moving Parts--flash memory only, so it's rugged. And it weighs about two pounds. I need this for NaNo! Especially since the price is reasonable--various models range from about $250 to $400.

It has a curvy keyboard.

Perfect for Nano, for sure.

Isn't it cute? I hope they release it soon!