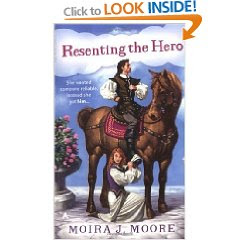 Yes, I stole that from Amazon. You can tell, can't you?
That is the worst cover ever. Not the artwork, although that horse is definitely unnatural. I mean it doesn't fit the book at all. At all. Dude, I can't even tell you how wrong that cover is.
This is a book I've picked up at the book store not once but about half a dozen times. I've read the back, looked at the cover with a shudder, and put it back. Because the cover makes the story look retarded and predictable.
Today at Borders I thought, "What the hell?" and bought the book. And while I won't add it to my recommended list, because I thoroughly disliked all the characters without exception, it does not deserve this cover.
Resenting the Hero by Moira J. Moore is not one of those spunky-princess-saves-the-incompetent-knight romps. It's also not actually a fantasy. It's set on an alien world, although since it's basically earth with strange forces involved, it might as well be a fantasy. But it's not a fantasy, and it annoys me that it's packaged as a fantasy. This is the second time in, what, a week? that I've read a SF book masquerading as fantasy, from which I assume that fantasy is selling better than SF right now.
But I digress. This world is beset by strange forces that cause natural disasters. Certain people called Sources can channel the forces and nullify the disasters, but the stresses of doing so will kill them unless they have another person called a Shield to keep their physical symptoms in check. Sources and Shields are trained from a young age and then bond together for life. If one dies, the other dies.
Resenting the Hero is about a newly-bonded Pair, practical Shield Mallorough and her Source, Lord Shintaro Karish, who has a reputation as a partyer. They have to save the world, or at least part of it, although the plot takes a painfully long time to take shape and drags a lot. And like I said, the characters are not likeable, and the traitorous ones are transparently traitorous. But the channeling and shielding bits are interesting, enough that I read the book today and don't resent the time it took me to do so. I may even read the sequel; the characterization may be better.
But lordie mercy, that cover. It's astonishing how wrong it is for this book. People who read the book thinking it'll be like the cover won't like the book; people who would have liked the book won't read it because of the cover. Ace has done all its readers a huge disservice with that cover, not to mention poor Moira J. Moore, who must still be seething--although since there's a third book out, she must not be seething too badly.
The other covers are just as bad.
Posted by K.C. Shaw at 8:22 PM

yeah, that cover is just weird.

Covers scare me. I am worried that, should I ever get published, I will end up with a butt cover. Really. Who comes up with these things?

People on crack come up with these things, is all I can figure.

And I agree with Jeremy too, that cover is just weird. Even if the book really was about a princess who had to be saved by a turkey of a knight, that cover would just be wrong.