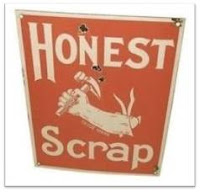 The awesome Aaron Polson has named my blog as Honest Scrap. I am humbled. Or maybe he just misread the award as Honest Crap. :) ETA: Jamie Eyberg got me too! I'm cool twice!

The award and rules goeth:

This award is bestowed upon a fellow blogger whose blog content or design is, in the giver’s opinion, brilliant.
The rules are as follows:
1. When accepting this auspicious award, you must write a post bragging about it, including the name of the misguided soul who thinks you deserve such acclaim, and link back to the said person so everyone knows she/he is real.
2. Choose a minimum of 5 blogs that you find brilliant in content or design. Or improvise by including bloggers who have no idea who you are because you don’t have five friends. Show the five random victims’ names and links and leave a harassing comment informing them that they were prized with Honest Weblog. Well, there’s no prize, but they can keep the nifty icon.
3. List at least ten (10) honest things about yourself. Then pass it on!
It's (2) that gives me trouble! I never know who to choose, because by the time I get around to blogging everyone I know has probably been picked by someone else. So if I'm doubling up someone's award--well, that just means they're extra cool, I guess.

Aaron Polson, who didn't say no tag-backs. He's always starting interesting discussions on his blog, plus he's a hell of a writer.

Leigh Dragoon, who doesn't read my blog, actually, but I read hers. So, you know, why not? She posts often about difficult subjects (notably women's rights and related issues), but she also links to great comix. Plus her artwork is great.

Carrie Harris, who is an expert on lots of important things like Batman eyebrows, ninjas, and Richard Simmons. Her Ward the Merpire excerpts would even make an emo kid laugh.

Jackie Jernigan, who doesn't read my blog either, and who has no excuse for not reading it because she is my mother. My actual mother does not actually read my actual blog.

and BT, who nominated Aaron, who nominated me. We'll just go in circles forever! BT's blog is always interesting and frequently updated. I don't know how he finds time to get so much done, either.

And here's 10 honest things about myself.

1. It's 7pm and I'm already in my nightgown.
2. I'm a pretty picky eater. I hate onions, dislike tomatoes, will not touch organ meat of any kind, will only eat peanut butter if there's literally nothing else available, and don't even like ketchup. But I will eat cat and dog food without hesitation.
3. I've never been drunk. Tipsy, yes, but not actually drunk.
4. I will turn 40 years old. Eventually. Yeah, not saying when.
5. My attention span seems to be shortening the older I get (see #4, above). Also my tolerance for stupid.
6. My left elbow is much more calloused than my right because I lean on my left elbow when I'm reading in bed, or (as now) when I'm lying on my bed typing.
7. Oh yes, I can type lying down while leaning on my left elbow.
8. I spend an inordinate amount of time playing Wordtwist. That wouldn't be so bad except I'm not very good at the game.
9. I love spinach. Loveitloveitloveit. I also love raspberries. Eating a huge pile of unadorned spinach as a meal and then having raspberries for dessert sounds perfectly reasonable to me. (See also #2, above.)
10. No tag-backs!
Posted by K.C. Shaw at 6:33 PM

Spinach YUM. I like it fresh or canned, doesn't matter. Except the canned no-salt stuff is pretty gross.

Unless I know that I am going out later, I always change into my pajamas as soon as I get home from work, whether that be 6 PM or Noon.

I leave my pyjama wearing until the last possible minute. I'm a terrible eater - I eat the same things all the time as there isn't much that I actually like. I'm also an unadventurous eater.

I may get dressed shortly after I get up, but I wear slippers all day.

Jameson--Okay, I don't feel so bad then. Night clothes are just so much more comfortable than day clothes (especially work clothes).

Cate--I'm pretty much the same way. Occasionally I'll experiment with some new recipe, but mostly I just make and eat the same things over and over.

Jamie--slippers are good. My mom has a cute brown pair I gave her, but she can't wear them around one of my cats because he snags at them with his claws. We think he thinks they're paws. Or maybe he just doesn't like my mom very much.

Gosh. I do so read your posts.

I am proving it right now.

You are perfect. And a saint.

Sorry, I should have said USUALLY you don't read my posts!

You are the best umbrella-holder I've ever met.