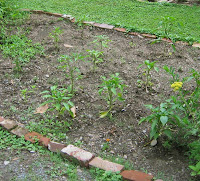 I did pick my first pepper this weekend, a sweet banana that Mom chopped up and added to the BBQ beans last night. I also picked a small but surprisingly ripe purple bell this evening that Mom plans to eat in a salad tomorrow.

Here's the big garden out back, which is planted mostly in peppers but also has ten tomato plants and half a row of very healthy lettuce. I've pulled all the radishes to make room for peppers. Most of the plants are still pretty small, which is why it looks like I'm growing nothing but weeds in some rows. The tall plants in front are sunflowers, along with zinnias, marigolds, and some wildflowers that I sowed in the clay-ey places that aren't good enough for vegetables. For some reason, in this picture you can't really see the tomato plants, even the ones in cages--they're sort of hidden behind the sunflowers or cropped off to the left--but so far it looks like we're going to get lots of tomatoes this year for a change.

Next year I plan to have more variety and fewer peppers.

As for writing (how's THAT for a segue?), I'm working slowly but steadily on The Trickster Society. The short story I had hoped to spawn from the novel hasn't really gelled. I'm just no good at writing short, or I've convinced myself I'm not. This is mostly why I have sold exactly zero stories this year--I've also written zero stories--and I suspect it's a big part of why I'm feeling so damn discouraged about my writing lately. Interest in Bell-Men seems to be running at zero too; I've still got twelve agent queries out, but the thirteen form rejects I've received so far have me pretty convinced that this is yet another project that will eventually only see print/e-ink after a slow, grim slog through agents, then large publishers, then small publishers, and ultimately I'll have spent months of my life writing the thing for a net result of a few dozen copies sold and low two figures in royalty payments. I think it's safe to say that I'm wondering a lot lately why I bother.
Posted by K.C. Shaw at 6:20 PM

Aside from a few short stories, the only novel of yours I've read was Jack of All Trades. I thought that was so well written, with an easy flowing narrative and wonderfully realized characters, that I fail to see how your other books aren't snatched right up by someone. JOAT made me a fan for life, and I for one am eagerly awaiting the chance to read more books from you. Plus, I bet it's just a matter of time before your name is plastered all over my local book store and people will be accusing me of being full of sh*t when I say "I know her!"

Lol, thanks. That makes me feel better--although I bet you're all over my bookstore first, and I'll be pushing your books on everyone I know. :)

Hopefully soon someone will read Bell Men and love it and make you an offer you can't refuse :)

If we don't write our head's explode.

PS: My peppers are still sprouts. Mayhaps I have missed the season.

People here don't plant their veggies until the May long weekend. And they've got to be started indoor first We've been sitting at about 35-40F for days).

Chin up, young writer...just a slump, it's only a matter of time...

Danielle--I hope so! I think it's probably scaring people off partly because it's so long, 125k. Then again, it's a fantasy. It's allowed to be long!

Natalie--Nah, peppers grow fast once it's nice and hot out. Are yours in well-drained soil? They don't like standing in water or in sandy, compacted soil.

Alan--You're right, of course. I was feeling down yesterday. I can't imagine waiting so late to start a garden! People here are out getting ready in March (and then they plant too early and get caught in a freeze, but, well).

First off, I know how you feel and whenever I hear the following I often want to throw something at someone, but the fact is, it only takes one agent to say yes. Keep dreaming. Thirteen agents is nothing.

And what Jameson said. Jack of All Trades was not the kind of book I'd usually read and yet I couldn't put it down and will happily list it in my top ten from now until I die. You deserve to be noticed.

Agents and publishers are just being slow right now. It isn't you, its them. :)

Jamie--Considering that practically every agent blog out there was all about the BEA convention this week, I reckon that's part of why I'm not hearing back. Um, maybe.