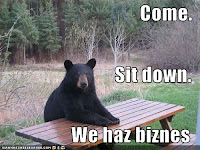 I like urban fantasy pretty well and I've been reading a lot of it in the last couple of years. I'm seeing some unwelcome trends, though, particularly with how female main characters are being portrayed.

If you're not familiar with urban fantasy, a big chunk of the genre is given over to books where a tough woman--often connected in some way with law enforcement--investigates a crime against or by a supernatural being. Usually the woman has some kind of supernatural ability, too: she can work magic, or she's a werewolf, or she's half-fairy/half-human, or she might just be gifted by being immune to a vampire's charms or being able to see through magical illusions. Think fantasy/crime thriller mix and you're on the right track.

Lately, though, many of the heroines I read have been, well, wimps. In a subgenre that is practically based on strong central female characters, it should be hard to find a wimpy heroine, but they're popping up everywhere. I don't know why, but I'd like to address a few pitfalls that I've been noticing.

1. Rescue me. Again.
I'd get pretty tired of a book where the main character never does anything wrong and never has to be dragged out of a messy situation by another character. On the other hand, heroines who have to be rescued constantly are even worse. Authors! When you've finished a draft of your new urban fantasy, please go through and actually write down in a little notebook how many times your heroine gets pulled out of the fire versus how many times she is able to save herself. If she doesn't save herself at all, go back in and give her a spine. At the very least, she should manage to save herself and possibly the world at the climax of the book. If a friend has to step in at the last minute to help her, make sure you've shown us earlier in the book that the heroine can get things done on her own too.

2. Angst and the modern girl.
Most heroines are either working through some current issues or still smarting from old scars. That makes characters interesting. Be careful, though: I've read a lot of heroines lately who whine constantly about how awful their lives are even when they are actually not doing so badly, and I've read almost as many heroines who seem to forget all about their problems until the plot requires them to give way to angst (usually so they can be rescued). It's a fine line to write. Treat angst like salt in a dish: too much and it's inedible, too little and it's bland.

3. Give me something to work with.
This is a problem that I've never ever seen in a book with a male main character. No matter how meager their supernatural abilities, an urban fantasy hero will always square his shoulders and wade into the vampire mob when it's clear that someone has to save the day. Heroines turn to mush and have to be rescued. Limit your main character's powers--no one wants a hero or heroine who's all powerful, because that's boring--but give her inner resources too. Give her anger, determination, or a sense of justice that will overcome her fear and propel her into action. And yeah, let her win when it counts.

4. All this and brains, too.
Just as an urban fantasy heroine needs to be strong enough to take on werewolves, zombies, renegade fae, and demons, she needs to be smart too. Sure, she can make the occasional bad decision--don't we all?--but if she's, say, tracking down a murderer and repeatedly misses clues that are all but labeled CLUE in big neon letters, readers are going to get fed up fast. For an excellent example of a bright heroine, I recommend DD Barant's book Dying Bites: main character Jace is believable as an FBI profiler because she picks up on clues, jumps to logical conclusions (even if she's not always right), and doesn't spend paragraph after paragraph chewing over her thought processes.

5. Action!
Urban fantasy is built on action. If a heroine is investigating a crime, she needs to do more than poke through a few desk drawers and talk to one or two people. If she's tracking down a demon or vampire king, the trail should be fraught with ever-increasing peril. Most importantly, the heroine should be proactive. She might be knocked down a few times and have to be rescued, her angsty issues should stop her cold a few times and make it that much harder for her to go on, she might be in extra danger due to her lack of abilities compared to her foes, and everything she learns should make her realize just how much danger she's in--but she should keep going, especially when it's hard.

Grit! Determination! A driving need to make things right! This is why we're reading urban fantasy; this is what a real heroine should do.

And maybe you've noticed, these are all things heroes should do too. Mostly they do. Let the ladies step up and be as strong as the men. As long as your characters are believable and flawed, making your heroine strong is not going to get her labeled as "just a man with boobs." If you don't make her strong, she's going to get labeled "doormat," and I don't want to read about doormats. They just lie there and get walked on.
Posted by K.C. Shaw at 4:15 PM

Me too! I want to smack them and tell them to shape up or get out of the book.

Also there should be humping. With the woman on top. You know, to be empowering ; )

And maybe the guy gets tied up a little.

Excellent post, I've read a little urban fantasy - mostly YA - and thankfully haven't stumbled over too many withering heroines.

I think I may just be choosing poorly in my reading choices lately. At least, I hope that's the case.

I think that a main character in a book should be a strong person. Otherwise you have Twilight and that story has been written.