Hey, there's a book by me available... 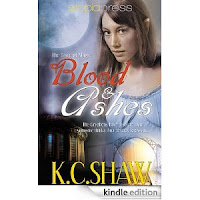 I can't believe I forgot.

Seriously, I forgot I had a book releasing today. I forgot about it entirely, in fact. It's Blood and Ashes, original working title Blood and Taxes (which I preferred until suddenly I realized just how much better the new title was), sequel to The Taste of Magic.

I feel I've done a disservice to Etopia Press, who released both books. Mom was still in the hospital when The Taste of Magic came out, so I wasn't able to do anything to promote the book. Then I posted a while after its release and complained that I'd tried to reread the book, and I no longer liked it. Way to talk up the book! Then, and this is simply inexcusable, I totally forgot about the release of the sequel--a book I've always loved and which I think is much better written than the original (which I also always kind of liked, although not as much as Blood and Ashes).

So I was going to go all link-happy in this post to encourage people to buy the book, or both of them, but when I went over to Etopia's site, they're doing some kind of an upgrade and they don't have anything about my new book posted at all. So here's a link to Amazon, where you can buy the Kindle edition of Blood and Ashes for $5.99. Rah rah rah!
Posted by K.C. Shaw at 9:11 AM

Labels: Blood and Taxes, me-me-me it's all about me

Yay! Blood and Taxes works, but it does suggest a different kind of book.

Congratulations! The fact that you forgot is a testament to just how much you do.