I've seen a lot of confusion about Mini Cooper cars in several books lately. Writers put Minis in their books these days because they're cute and getting more common. Before the mid-2000s or so, you never ever saw Minis in the U.S. They weren't made here, weren't available here, and no one had them. So I'm talking about modern Mini Coopers, the ones made now.

Minis are a lot roomier inside than they look. I have long legs although I'm not particularly tall, and I'm comfortable in my Mini. My brother used to drive one and he was comfortable in it. There's a lot of leg room, a lot of head room. Tall people do not have to fold themselves up to get into the front seat. I did check the back seat of my Mini to see how roomy it is and felt kind of cramped, but not claustrophobic.

Here is a picture of my car key and the key dock in my Mini. To start the car, I dock the key and push it in, put my foot on the brake, and press the start button. To turn the car off, I put it in park and push the start button again. You can get remote start keys that you don't have to dock, but that costs more. My brother had one with his Mini and he didn't even have to take the key out of his pocket. So, writers: your Mini Cooper driver will not be turning a key in the ignition. 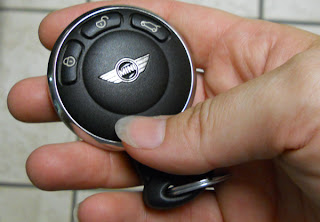 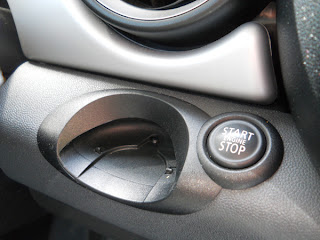 Here is a picture of the control panel. You will note my awesome Photoshop skillz in labeling the buttons that raise and lower the windows and lock the car. You will also note that these buttons are in the MIDDLE of the car, not on the doors like other (lesser) cars. So the book I read where a bad guy leans into an open window to unlock the Mini's door before the heroine could stop him: couldn't happen. (Note also that I'm sitting on the passenger's side of the car, although I can't remember why. The steering wheel is on the left just like all other American cars.) 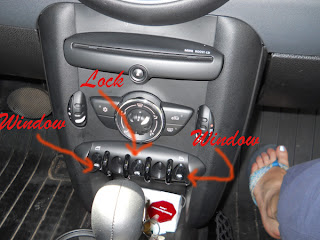 Something that hasn't come up in any books I've read but which might be useful to a writer out there is the Mini's weird door handles. They don't open like ordinary car handles. You have to kind of pinch them. Here's a picture hopefully demonstrating me pinching the door open. 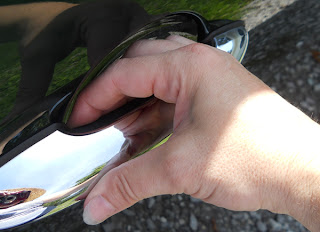 See how my fingers are pressed against the dark plastic bar behind the chrome handle? You have to put a bit of muscle into it; you don't just slide your hand under and pull. People who've never opened a Mini door before have trouble with it the first time. That could slow a bad guy down.

I hope my little tutorial helps clear up some confusion. And yes, I did just wash my car. Why do you ask?
Posted by K.C. Shaw at 3:05 PM

Cool! Jealous of the Mini Cooper. Not that I could drive it.

You could get the model that you control with your MIND. It costs more, though.