The Cemetery at Clear Creek 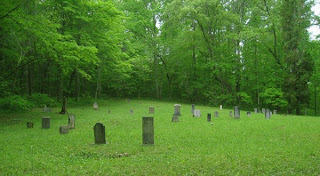 I took a bunch of pictures at Clear Creek yesterday, mostly of the old cemetery I found a week or two ago. I was going to post one here and stick the rest on my old LJ (which I no longer use), but apparently you can't upload pictures to LJ anymore unless you give them some cash--sorry, "upgrade your account."

So here are just a few pictures: 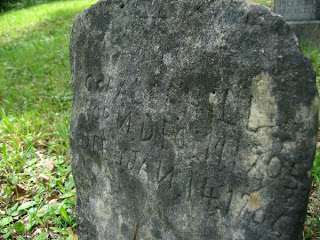 This one's a handcarved gravestone. I don't know if you can see it well enough to see that the N's are all backwards, but I found it sort of poignant.
I spent half an hour or so exploring the graveyard, which is off a dirt road that's still drivable, although I wouldn't want to take my car up it. From a little marker I found, there used to be a church on the spot in the late 19th and early 20th century. I didn't see any gravestones later than 1931, although a few of the older stones have been replaced with new ones and one or two even had some faded plastic flowers decorating them.

We've had rain for a solid week, and the lower trails are soggy. At one point the trail crosses Clear Creek, but the creek is so high that the stepping stones were almost covered. I took my boots and socks off and waded across, and then walked barefoot for a while--watching out that I didn't step on anything that might object, like the millipede in this picture. That's about as close as I want my bare foot (or any part of me) to get to a millipede. I do not like things with that many legs. 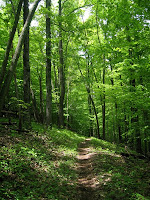 And lastly, here's a picture of the trail at the top of the ridge. I didn't shop it at all--it really is this green here.

Again, I long for vistas like that. Thanks for sharing. You can keep the millipede.

I think it was all the rain, but there were millipedes everywhere--the yellow and black ones like in that picture, and I saw one of the long skinny reddish ones too. They freak me out, man.

What a strange graveyard - it's like the headstones just popped up by themselves.

I've never seen a millipede like that. We only have the red/brown ones. As for the handcarved headstones, very cool. Beautiful country you live around.

Cate--I tried to get a picture of the first view I had of the graveyard, where I came around a bend and saw the stones through the trees. It was very eerie, but my mom's camera isn't really good enough to pick up details like that.

Jamie--Around here the yellow and black millipedes are super common and the reddish ones are kind of rare.

Old graveyards are so neat...there was one in Spokane where I grew up that had a section that was unmaintained, and as creepy as all get-out. When I was a teenager we'd sneak in at night, and you could crawl around under huge, old pine trees and find headstones that had roots and tree trunks grown around them, ones that nobody had probably seen in decades. There was an old tunnel underneath the whole graveyard...like a storm drain but big enough for a train, and it ran right underneath the old part of the graveyard. We used to scare the hell out of ourselves down there. Good times and therapy ensue.